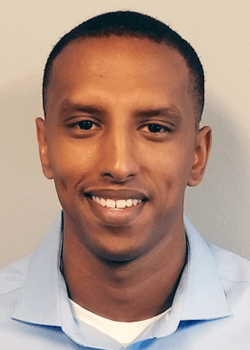 I am from Eritrea, a country in east Africa, but was born in Khartoum, Sudan as a refugee. My parents left Eritrea during a civil war in an attempt to make it to the United States. Seven months after I was born we were lucky enough to make it to the United States. We bounced around a bit from state to state when I was younger and eventually landed in Albuquerque, New Mexico.

My mother studied for and had her naturalization interview while I was in middle school, and I remember helping her and seeing how much it meant to her. Although English was her second language she pushed through and made sure that she achieved her goal and was able to get some peace of mind in knowing that she was a citizen. Even though I grew up here and English is my first language, I did not naturalize and become a citizen until I was 23 years old. The process was just too expensive and I did not have the money to naturalize. At that time in my life I did not have any legal training and was unaware that I was technically already a citizen and did not need to go through the same process as my mother. I remember the feeling of being overwhelmed during the application process, and not wanting to do anything incorrectly because I did not understand what the possible penalties would be. Going through that process helped motivate me into pursuing a career as a lawyer so that I could help people who find themselves in similar situations where they feel helpless.

I attended Creighton Law school in Omaha, Nebraska and had the opportunity to experience different legal fields. Growing up the way I did made me very intrigued by the idea of going into immigration law, and to make sure that this was something I really wanted, I spent my final year at Creighton as an extern for the Department of Homeland Security Office of the Chief Counsel in Omaha. I had the honor of working with some great people who showed me the process from the government’s side. The attorneys I worked with were some of the most respectful and understanding people I have worked with at any job. I will never forget the time I spent there, but knew that I wanted to work on the other side and help people to stay in the country. I was fortunate enough to go from there to Hendricks Law. From day one it has been clear that this is a firm that wants to help people obtain the legal status that is available to them without taking advantage of them. Working for the Office of the Chief Counsel I saw my share of disinterested private attorneys, and I am happy and proud to say that is not the case here.